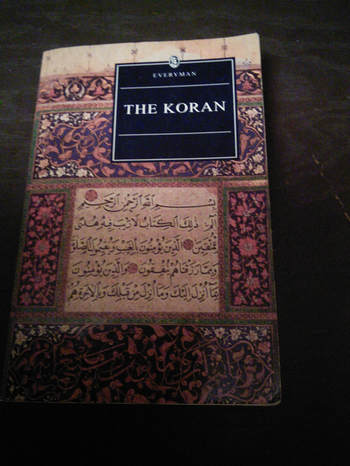 ·        The Koran says that the Flood took place during Moses’ time under Pharaoh, when Haman built the Tower of Babel and says that one of Noah’s sons drowned and that the Ark rested on Mount Judi. The Bible says the Flood took place in Noah’s day, none of his sons drowned and the ark rested on Mts. Arat. There was no global flood during Moses’ time. The Bible also implies that it was under Nimrod that the Tower of Babel was built and that Haman lived during the time of Esther. The Koran seems to mix up people, places and events.

·        The Koran states that Mary, Yeshua’s (Jesus’) mother’s fathers name was Iram when the Bible does not have this name recorded as Yeshua’s grandparent in either Matthew or Luke’s genealogy.

·        The Koran records Pharaoh using crucifixion when there was no record or archeological evidence of crucifixions being used in Egypt (B.C.). Crucifixion was invented by the Romans (A.D.).

·        The Koran has the Patriarchs saying we are Muslim when the word Muslim was not in existence or use as a personal term until the time of Mohammed.

·        In Sura 9:30 it says Jews believe Ezra (Uzair) is the Messiah. No Jew then or today believes in a Messiah which is called by those names.

·        Sura 20:87, 95 says Samaritans were present when the Golden Calf was presented in the desert among the children of Israel. Samaritans didn’t even exist as a people until New Testament times.

These are but a few of many contradictions found in the Koran. The Koran cannot be accurate; it did not have an accurate nor stringent form of copying manuscripts as does the Tanak (Old Testament) and the Brit Chadasha (New Testament).