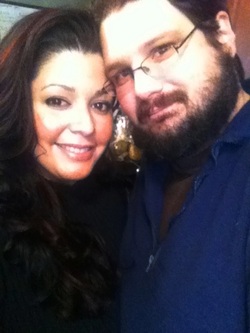 Moriah bat Shofar (Christine Schaefer) is Director of the women and family branches of A.D. International, and Morah (Professor) of Natsari Apologetics, Women's studies, and Torah.
Reared in protestant Christianity, and child of Methodist minister parents she came to know Yeshua (Jesus) as Messiah as a young woman. She began pursuing the “Hebrew Roots” of Christianity in her twenties and eventually found her home in Natsari Judaism. After many years of formal and personal study she formally converted to Natsari Judaism on December 16, 2009.
Moriah has trained under two Rabbis and continues her studies as a talmidah Torah and of the Hebrew language. Moriah is a trained women's crisis counselor and lecturer and has spent the last seven years lecturing on such subjects as creationism, homechooling, and the Proverbs 31 woman. Most recently she speaks about her life as a Natsari woman. She currently resides in central NY with her husband and daughter.

Winter 2013 Moriah received a classical Ordination (Shmicah) as a Natsari Rabbi by Rav. Perlmutter and the Conservative Yeshiva Natsarim.
Universal Mission Statement
Fear God, and keep his commandments (Ecc. 12:13) to do justly, and to love mercy, and to walk humbly with my God (Micah 6:8) and to walk in the footsteps of Messiah Yeshua by walking and following Him in the Torah (Matt. 5:16-20)